Mythology of The Ram Across Cultures

The astrological sign Aries is for many people the most familiar connection to the symbol of the Ram. Signaling the start of the vernal equinox, Aries is the first of the twelve Zodiac signs and represents rebirth and renewal. This is association not unique to astrology, which is itself the distillation of many mythologies and belief systems. The ram figures prominently in a diverse range of mythologies ­ including Pharoanic Egypt , pre-Christian Europe, Classical Greece, West Africa, and the Judeo-Christian tradition ­ and it is often associated with celebrations of the "solar return" or return of spring and fertility after the hiatus of winter. Below is a survey of some the associations and practices surrounding the image of rhe Ram across culutres.

More on the origins of Aries in the Zodiac: www.skyscript.co.uk/zodiachistory4.html

Ceremonies honoring the Ram, or Ebune, are held to recognize the return of the rains after dry, winter season. Ram masks often feature a white line running down the central axis of the head. The line divides life from death, light from darkness, and reinforces the notion the Ram as the sign of rebirth or return from death. The Nigerian Ibo figure of Ikanga is associated with Ebune, and symbolizes resilience and strength. Ikangas have three distinct phases of transformation, which mirror a personal transitions that occur in life. The "young" Ikangas are largely abrstract forms, while the elder Ikangas are figurative, "fully formed" as it were. Rams' horns are the only constant throughout the three phases, providing the strength and motivation necessary to make the difficult journey from one phase of life to the next. The qualities attributed to the Ikanga translate to other areas of African ritual art, and horns of the Ram appear in many other masks. Often the tips of the horns are given a color. Two common colors are red and yellow: red, as deptiction of blood, embodies assertive, decisive action, whereas yellow is associated with change that comes through medecine or healing.

In the Yoruba culture, the return of the rains is recognized through the figure of Shango, an orisha, or deity, who is represented by the Ram and is associated with storms and thunder. Shango was a historical Yoruban king who was killed and resurrected as a divinity. Shango is also present in the Cuban tradition of Santeria and the Brasilian Candomblé traditions, which were derived from West African religions imported with colonial slaves and fused Catholic veneration of the saints. Shango is associated with Santa Barbara, who is often depicted carrying the palm leaf, a symbol of martyrdom. Palm leaves were used by the Greeks and the Romans to signify triumph over death, and thus were used to welcome Christ on his return from exile in the desert, celebrated as Palm Sunday. In Caribbean and African rituals, the palm plays prominent role, in particular as ritual offerings to Ram spirits invoked by the mask.

To learn mor about Shango:www.azodnem.com/Cauldron/Yemaja.htm 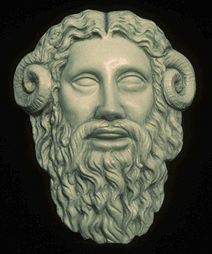 The Ram, is the very beginning of the astrological cycle, appears in early Egyptian myth as Khnum, who, like the Greek Prometheus, is credited with the creation of the first men out of clay. One imagines that this primordial clay would have been dredged from the silt of the Nile, whose fertile, life-giving floods mark the most important cyclic event in Egyptian agrarian life. Just as the West Africans celebrated the return of the rains, so, too, did the ancient Egyptians celebrate the annual life-giving flooding of the Nile. The god responsible bringing the flood was the Ram-horned Amun (one species of ram is today classified as ovis ammun). Originally a god of the wind, Amun increased in importance during the Middle Kingdom, supplanting the god of war and gradually coming to dominate the Egyptian pantheon as its pre-eminent god. He ultimately merged with Zues, as Ammon, during the Greco-Egyptian Ptolemaic era (see image on left). As he evolved, Amun assumed more control over aspects of the cosmos and eventually merged with Re the Sun god, as Amun-Re. Thus, the annual return of the sun in beginning the seasonal cycle was bound inexorably to the Ram, as it still is in the Zodiac. Spring rites in Egyptian religion (and later among the Romans) specifically celebrated the shepherds.

Amun-Re's solar return occurs not only at the seasonal level, but as a daily cycle of death and rebirth. The Egyptians believed that Amun-Re was obliged to die each night to travel into the Underworld domain of Osiris. With the dawn of each day Amun-Re is resurrected anew, and Osiris, in homage to his diurnal counterpart, wears a head-dress of rams' horns. The soul of Amun-Re is said to be a firebird, or bennu, known more commonly by its Greek name, Phoenix (meaning "red"). The Phoenix lives for a hundreds of years, ending its life in a self-consuming conflagration, only to be reborn from its own ashes. In the Phoenix one finds parallels to the astrological Aries, associated with the element of fire; and in West African tradition to the red-tipped horns of ram masks, and to Shango, whose sacred color is red.

To learn more about Amun-Re and the ram in Egytpian myth: www.touregypt.net/featurestories/ram.htm 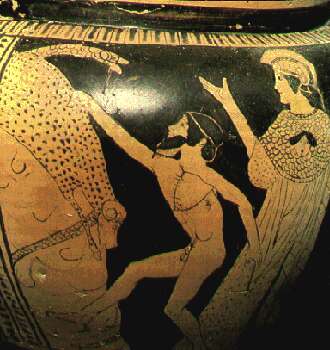 The solar return embodied in Amun-Re is parallelled in the Classical Greek myth of Jason's quest for the Golden Fleece. We inherit the constellation of Aries from this myth, which depicts a golden Ram offered by the shepherd-god Hermes to bear away the children of Queen Nephele, who feared for their lives amidst palace intrigues. The grateful son of Nephele scarifices the Ram upon his arrival in a kingdom far to the east on the Black Sea. Jason and his crew set sail in the Argos to claim the Golden Fleece from the sacred grove where it hangs, an allegorical quest to reclaim the sun from its exile in the east. To win the Fleece he must plow the field of Ares, who, like Amun, was a god of war who evolved from earlier roots as an agricultural deity.

To Learn more about Jason and the Quest for the Golden Fleece: www.bulfinch.org/fables/bull17.html

Jason's eastward journey to reclaim the Golden Fleece makes geographical sense. Since the sun is reappears daily from darkness on the eastern horizon, it is no accident that other cultures as well associate the East with rebirth. The word "east" itself stems from an obscure Germanic fertility goddess Eostra, who was celebrated at the advent of spring, and from whose name we also get the words for estrogen, and the Christian resurrection rite of Easter. Indeed, one could say that the Judeo-Christian ritual tradition begins and ends with the ram; from the ram that provides Abraham a sacrificial surrogate for his son, to Christ's sacrifice and resurrection as the "lamb of God."

Celtic myth describes Cernunnos (right), a horned deity accompanied by ram-headed serpent. The latter is possibly related to Jormangund, the giant Norse serpent who body is wrapped around the world, his tail grasped in his mouth symbolizing, again the theme of cyclic return. The Norse version of the serpent is not said to be ram-horned, the image at left portrays him with distinctly ovine features.

More on the Ram in Classical and Judeo-Christian tradition: ww2.netnitco.net/users/legend01/ram.htm

Back to the Ebune Home Page